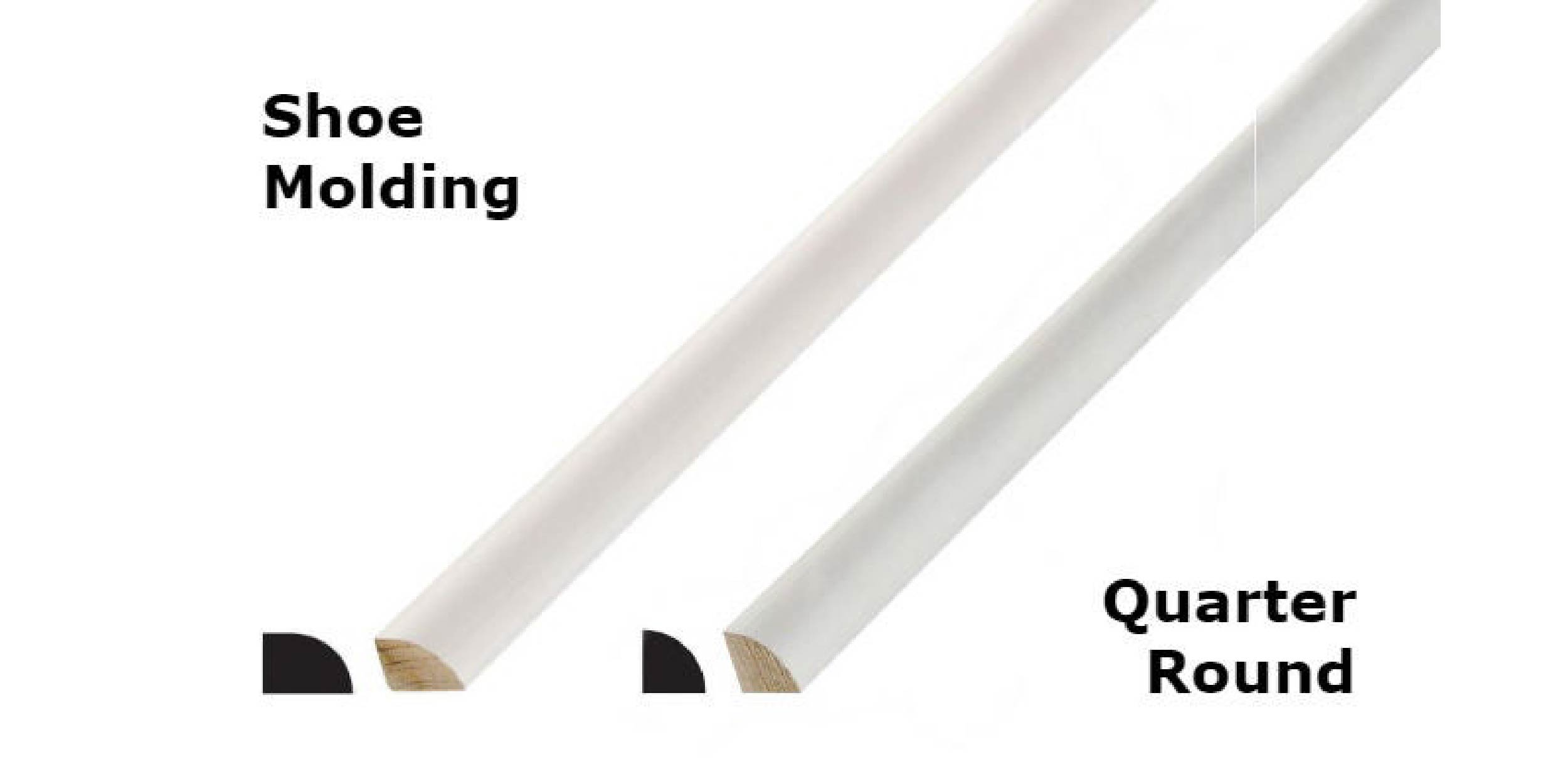 When it comes to home improvement projects, you might find yourself confused between show moldings and quarter rounds. After all, they are similar enough that they would look identical to those who are unfamiliar with the two. In fact, both shoe moldings and quarter rounds are used interchangeably in some cases. However, we are here to tell you that while quite similar, the two do have several differences and specific purposes. Read this article to find out more about shoe moulding vs. quarter round moulding.

Both shoe moldings and quarter rounds are a variation of moldings, which is why the two share one primary purpose. They are used as a means to add curve appeal to an interior space. For example, using them would allow you to add a transition between the abrupt appearance of a wall joined to the floor.

Shoe Molding; What Is It?

Shoe moldings are a type of trimming option and are mainly used for walls or even baseboards. They feature a curved edge within their design. Shoe moldings feature curved edges that are much more subtle and are, by standard, a half-inch in width.

Quarter Round Molding; What Is It?

Since both shoe moldings and quarter rounds are moldings, their purpose and placement are the same; quarter rounds are also fixed along a wall or baseboard. However, they are also, in some cases, fixed alongside backsplashes as well as countertops. Typically, they are manufactured using wood and feature a curved design as well. However, their curved edge is much more prominent.

In order to give an interior space a much more professional outlook with an overall smooth look, shoe moldings and quarter rounds are used. They are types of moldings and can be manufactured using a variety of materials, which include wood, tiles made of natural stones, laminate, and concrete. However, the most common material used for their manufacturing process is solid wood or even wood veneers. Apart from that, both types of moldings can be either installed and left untreated or can be painted over. Both choices have a curved edge appearance and typically have a width that falls under one inch. Due to this short width, both shoe moldings and quarter rounds are quite easy to cut as well as customize.

While both types of moldings share many similarities, that does not mean that they are the same. The two have some major differences that can help you to distinguish between the two.

Shoe Moulding Vs. Quarter Round: Curve

Although both molding types feature a curved edge design, the prominence of the curved edge varies. So, a quarter round moldings curve is much more prominent than that subtle curve of a shoe molding.

Shoe Moulding Vs. Quarter Round: Profile And Width

Although they both feature a curved edge design, the overall profile of the two can also be distinguished if looked at closely. You will notice that the profile of a quarter round molding is much rounder, where the radius is equivalent to that of 3/4th of a circle. In contrast, the profile of a shoe molding is much more squat-like. Although the typical width of both the moldings falls under an inch, shoe moldings have a width of half an inch while quarter round moldings have a width of 3/4th of an inch. It is due to this width that the curve of the quarter round is much more prominent.

Shoe Moulding Vs. Quarter Round: Versatility

On the market, you will be able to find quarter round moldings that come in a variety of sizes and, therefore, are much more versatile than shoe moldings.

How To Install Shoe Moldings and Quarter Round Moldings

Since the purpose and placement of both shoe moldings and quarter round moldings are the same, the two can easily be installed using the same method.

Start off by first choosing the molding type that best suits your taste. If you prefer a much more curved outlook, then the quarter round molding is your best bet. However, if you would like a much more subtle transition between the floor and the adjoining wall, then shoe moldings are the way to go. Once you have chosen and purchased your desired molding type, you will then have to remove the molding that you would like to replace.

Grab a tape measure and start taking the measurements of the area that you would like to cover with your desired molding. Note these measurements down and cut your moldings according to the measurements that you took. A good tip to create transitions that are both smooth and seamless is to cut both the inner corners and outer corners of the moldings.

Now that you have your molding pieces cut and prepared, you will begin to nail each molding piece into your desired location. The best and easiest way to go about this step is to use a nail gun rather than having to use a hammer to fix the nails and moldings in place. This will not only make the process much easier, but it will also save your time and make it less labor-intensive. When fixing the moldings in place, be sure that you place each nail anywhere between one foot to two feet apart from one another, particularly in the center of the molding. This will help in avoiding the formation of any splits or cracks within the molding.

They are incredibly essential when it comes to designing or renovating any interior space, whether it is a residential space or a commercial one. In fact, if these baseboard moldings aren’t used, you could end up with an extremely abrupt and discomforting gap left between the trim and the flooring of your space.

You can also check: Top 5 Best Smart Lock For Airbnb In 2021